This is my least favorite part – I’ve written and started to edit the text, and at the same time I’m starting to format it for e-readers. This is time-consuming and fiddly and not the most fun part of writing a book. 🙂

It is coming along, though, albeit slowly – so “late 2015” is still a pretty reasonable launch date.

Hey, office Halloween parties can be fun. But they’re also minefields since there’s always that one coworker who doesn’t understand that yes, blackface is still racist.

Honestly, I’m thankful this year that I can wear a costume to a couple parties tomorrow but don’t have to learn uncomfortable truths about my coworkers.

Sometimes it feels great to have worked your butt off for eight or ten hours straight. Sometimes (most of the time) it totally feels like crap.

The good news is that “effort” doesn’t really matter.

It’s dangerously easy to feel as though a 10-hour day spent plowing through your inbox, or catching up on calls, was much more worthwhile than two hours spent in deep concentration on hard thinking, followed by a leisurely afternoon off. Yet any writer, designer or web developer will tell you it’s the two focused hours that pay most—both in terms of money and fulfillment.

And in fact, in the 2013 book Daily Rituals, which looked at the work routines of 161 writers, composers, painters, choreographers, playwrights, poets, and more, almost nobody reported spending more than four or five hours a day on their primary tasks.

The takeaway: Sometimes more is not more. Or as 99u’s Oliver Burkeman says, “Remember that tiring yourself out—or scheduling every minute of your day with work—isn’t a reliable indicator of a day well spent. Or to put it more cheerfully: The path to creative fulfillment might take a lot less effort than you think.”

You can print this out and keep it by your desk as a nice reminder. (If anyone has a similar printable with dogs, let me know!) 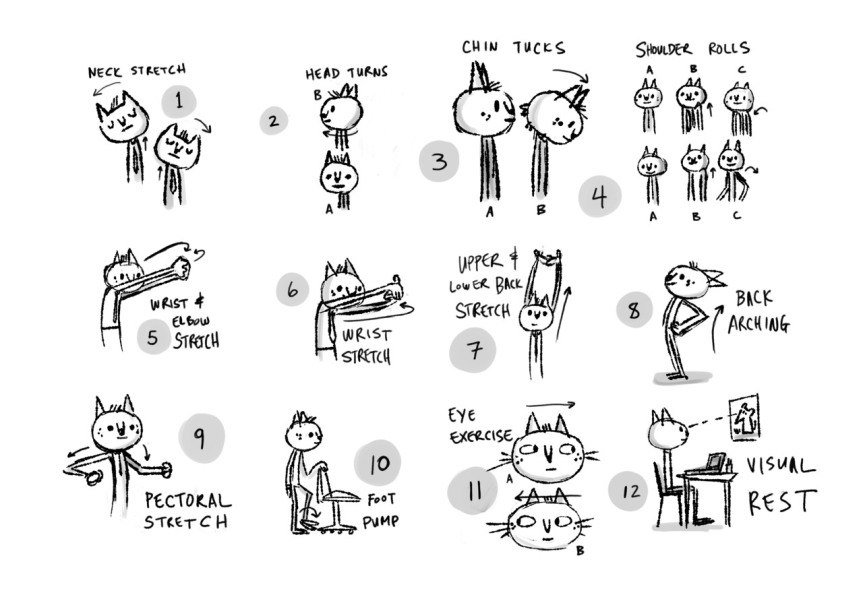 Found this fascinating read  about the pros and cons of freelancing when you have depression.

The cons are fairly straightforward. Being by yourself in your house means that if you’re on your way into a bad spot, there’s no colleague to say, “Hey, are you OK?” And not having to force a smile on means you could spiral into negativity faster.

But those same drawbacks are also what some freelancers with depression find liberating.

“For me, not having to get suited and booted every day isn’t just a perk, it’s a necessity, because some days I just don’t have the energy,” writes Rin Hamburgh. “The fact that I don’t have to slap on a fake smile and spend all day with a group of people who almost certainly don’t understand what I am dealing with, is an incredible relief.”

Self-employed consultant Eva Menezes Cunningham says that the flexibility that comes from freelancing is also a huge bonus. “I’ve learned to listen to my body and mind more,” she says. “I can work crazy hours some of the time and take it easier when I feel the warning signs of burnout. It is much better for me to be able to control my own work and lifestyle rather than being back in a corporation.”

This image has been going viral lately and while it is not, not, NOT a cure-all, especially for serious depression, I think part of the reason it’s going viral is because sometimes we forget about the basics of self-care, and they can make a huge difference. As the original creator said, this stuff is “the low-hanging fruit that can clog our ability to cope with everything else, so that we can tackle the hard stuff.”

As freelancers, even if we’re not depressed depressed, keeping these self-care reminders around for days that you just can’t get anything done–or conversely, days that are so hectic that you never leave your desk–can do wonders for your mental state.

Buy The Healthy Freelancer, an ebook chock-full of ideas for keeping your mind and body feeling awesome while also growing your freelance business, here.

Want to learn more about staying healthy while working from home, or about The Healthy Freelancer? Sign up for our mailing list (no spam, seriously) here.